Home
Products
About Us
Factory Tour
Quality Control
Contact Us

Your mechanism is good ,I really like this quality!

Your team is very professional,technology support is perfect! thanks for your help with our project!

The turnstile from them are customized with high quality,since our projects are special, they can customize as our requirements, that's great!

RELIABILITY
Patented compact mechanism ensures the long life of the lubricating oil inside and high quality electrical components.
WIDER AND FASTER OPENING
Compared to tripod turnstile, flap barrier allow wider opening for user to bring along luggage or big parcel. Compared to swing barrier, flap barrier offer more faster opening by retracting its wing instead of swing open.
SAFE AND FRIENDLY
Flap wing can also be configured to auto-reverse when safety IR sensor detected user to avoid crushing onto user. During power failure, flap will automatically open by itself to allow free passage for emergency escape. Flap will automatically closed back when power resume. LED display at the front show if the lane is available or closed for maintenance.
ANTI TAIL-GATING
Smart lock mechanism effectively allow only one person to pass through at a time. Arm will automatically relock back if nobody pass through after a preset delay time.
STRICT SECURITY
SFlap wing will auto close if there is no pedestrian or pedestrian inisde the lane is taking longer than allowed time limit to pass through. This avoid any unauthorized person to sneak into the building when flap was opened wrongly. The delay time can be preset.
ALARM DETECTION
Alarm light at top cover helped guard to easily identify alarm event for immediate response. 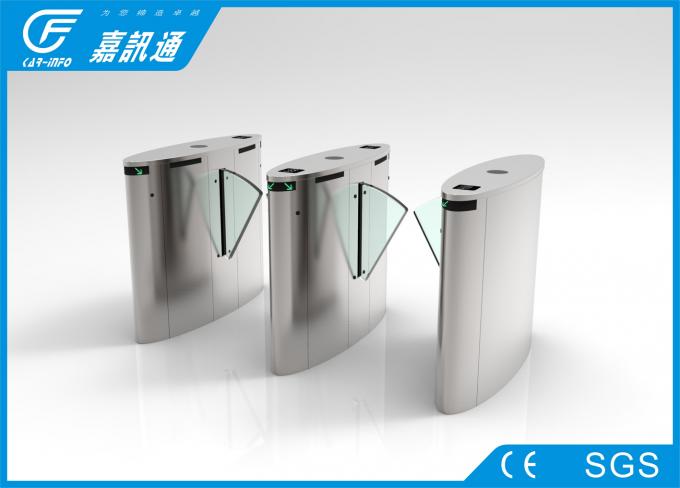